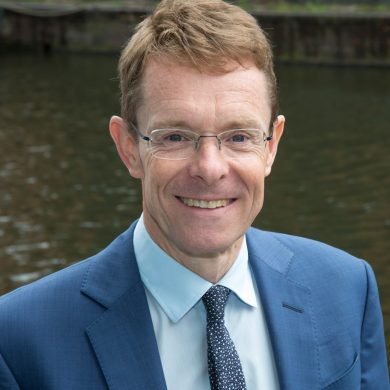 Andy Street has combined a career with John Lewis, Britain’s most successful workers’ cooperative, with a host of high-profile economic development roles.

Starting on the John Lewis graduate scheme, he rose through the ranks to become Managing Director in 2007, overseeing one of the most successful periods in the company’s history; a 50% increase in gross sales to over £4.4bn, a doubling in the number of stores, and the growth of the company’s online business.

In May 2011, Andy was appointed Chair of the Greater Birmingham & Solihull Local Enterprise Partnership, which is now one of the most successful LEPs in the country having created nearly £8bn of GVA and over 100,000 jobs. Supporting and engaging the digital economy has been a key aspect of this, and under his leadership the Growth Hub was launched which is a one-stop shop for businesses across the West Midlands.

In June 2015, Andy Street was awarded the CBE for services to the national economy. He was named the ‘Most Admired Leader’ of the year by business magazine, Management Today in 2014. He received the ‘President’s award’ from the Greater Birmingham Chambers of Commerce for his work in the region. He holds three honorary degrees, from Birmingham City University, Aston University and the University of Birmingham.

In September 2016, Andy was selected as the Conservative Party’s West Midland’s Mayoral candidate.